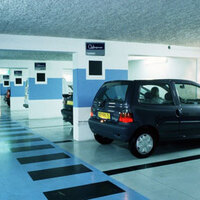 Lille-Europe station is the second largest station in the city of Lille. It is located in a very lively area, on the edge of the hypercentre: this is why it is more than advisable, if you have to go there by car to take your train, to reserve your secure parking space in advance with Onepark!

Opened in 1994, Lille-Europe station is internationally oriented. Indeed, it is served by the Eurostar, which allows travellers to go to London. But that's not all: TGVs (national and European) and TERGVs also pass through. In terms of passenger numbers, however, it is located behind its neighbour Lille-Flandres station, which covers the whole region and the entire European metropolis of Lille.

Lille-Europe station is at the centre of a railway triangle, connecting Paris to London and Brussels. However, it has "only" two platforms, six tracks and a little over 7 million passengers a year. It is also perfectly connected to Lille's public transport network. Tramway lines R and T, as well as metro line 2, run through Lille-Europe station.

With Onepark, your parking space awaits you

Your train leaves from Lille-Europe station? Save time and take advantage of the best rates by booking your secure parking space near the platforms in advance. With Onepark, all you have to do is enter the dates you are interested in, and compare the prices, locations and services on offer. For example, some car parks offer a valet parking service: all you have to do is leave your vehicle on the drop-off, and someone will come and collect it and park it for you!