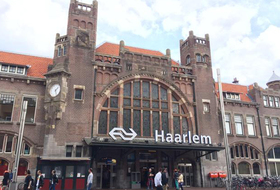 Haarlem is a city and municipality in the Netherlands and the capital of the province of North Holland. Finding a parking space in Haarlem is easy with Onepark .

Haarlem is a city in the north of the Netherlands with approximately 160,000 inhabitants. Haarlem is one of the medium-sized cities in the Randstad, and is the largest city in North Holland after Amsterdam. This city on the Spaarne is located north of the Bollenstreek.

A short history of Haarlem

Haarlem was first mentioned in literary sources in the 10th century. The plague killed half the population in 1381. In the 13th and 14th centuries, the city's economy was mainly focused on brewing beer, shipbuilding and cloth industry. In 1839 a new train service to Amsterdam was established. A lot of damage was done during the Second World War, but today the city center is a pleasure to discover.

The municipality of Haarlem has two railway stations, Haarlem station and Haarlem Spaarnwoude station. City and regional transport in and around the city is mainly provided by transport company Connexxion. After the four major cities (Amsterdam, Rotterdam, The Hague and Utrecht), Haarlem has the most foreign tourists per year. The main attractions of Haarlem are the historic city center, the Frans Hals museum and the Teylers Museum. With around 1 million visitors, the flower parade is the largest event in the province. Parking in Haarlem is not easy, all the more reason to use Onepark .

Parking in Haarlem is best done with Onepark

Onepark offers a range of options in Haarlem . More and more people are choosing Onepark to find a parking space in Haarlem . Be part of the revolution and reserve your parking space easily via our website. No more losing time searching and also saving up to 60% thanks to Onepark .