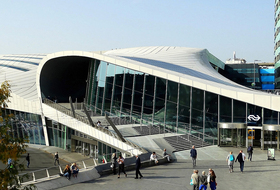 Arnhem is a city (Hanseatic city) and municipality in the Netherlands and also the capital of the province of Gelderland. Finding a parking space in Arnhem is easy with Onepark .

Arnhem is a city and municipality located in the eastern part of the Netherlands. With its approximately 157,000 inhabitants, Arnhem is one of the larger cities in the Netherlands. Arnhem has many parks and museums, and also has a vibrant nightlife.

A brief history of Arnhem

The name "Arneym" ( Arnhem ) is mentioned for the first time in 893 in a goods register of the Prüm abbey. The city was plundered by the Vikings in 847. Arnhem then grew rapidly, and many houses from that time testify to the wealth of the new residents. Arnhem was largely destroyed by bombing during WW2. Arnhem today is a quiet city on the Rhine. It received an award as "best inner city 2007-2009 of the Netherlands".

Arnhem, the hedge of the east

Today, Arnhem is the center of technology and energy in the east of the Netherlands. Arnhem has four train stations and the only existing trolleybus network in the Benelux. Sights include the Arnhem Museum, the Dutch Open Air Museum, Bronbeek Museum, Royal Burgers' Zoo and the John Frost Bridge. One of the largest employers in Arnhem is the Rijnstate hospital with more than 5,000 employees. Arnhem is divided into 8 quarters, each with its own character. The demand for parking in Arnhem is large, which is not surprising for such a big city.

Quickly find a parking space in Arnhem with Onepark

Onepark offers various options in Arnhem . More and more people are opting for Onepark parking spaces in Arnhem . Be part of the revolution and book your parking space through our website and save up to 60% with Onepark . From there you continue your journey carefree with public transport.